The Professional and Commercial Editions of Breeders Assistant include some advanced genetics features. 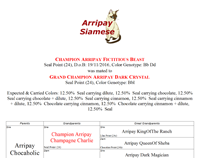 All editions of Breeders Assistant include boxes for you to store the genotypes of your animals. These are found on the Genotype tab of the animal details window.

E.g. if you are a dog breeder you might enter Bb Dd in the Color Genotype box for a dog that carries liver/chocolate (Bb) and blue (Dd).

The Personal Edition of Breeders Assistant treats these boxes much as any other - they are simply text fields which are stored alongside the rest of the animal details, and they can be included in pedigrees etc., but otherwise no special significance is attached to them.

With the Professional Edition, and depending on your version of Breeders Assistant (see below), you can select a 'genetic configuration', tailored to a particular breed, which gives the software some intelligence about these fields.

Firstly, it provides a friendlier way to enter the genotypes. Instead of just manually keying them into the boxes, you can now choose the disposition of each gene using pulldown menus, for example:

But more significantly, the software can use the genotypes to make predictions as to the outcomes of matings. Many breeders know that the colors/patterns of the offspring from any given mating depend on the color genotype of the parents. If you know those genotypes, you can systematically work out the possibilities the mating will give rise to, and hence the distribution of colors/patterns that can theoretically be expected.

You can get Breeders Assistant to do this for you instead of doing it by hand. And you can include the results of such an analysis in a trial mating pedigree or within a mating certificate1.

The following table lists that standard genetic configurations that are currently supplied with the different versions of Breeders Assistant. They are provided as fixed configurations that cannot be user edited. Advanced users may like to know that it is possible to purchase these configurations in a user-modifiable format - for details please contact the customer service help desk.

Breeders Assistant, Professional Edition, can create a report that analyses the distribution of genes and alleles within a population.

E.g. if you're using Breeders Assistant to record details of all members of a given breed in a region or country you can then analyse the distributions of the different alleles within that population. 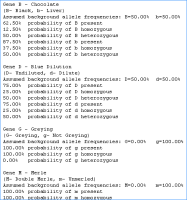 Breeders Assistant, Professional Edition, can predict the probability that an animal:

The calculation is done by examining the genotypes of a configurable number of generations of ancestors (max. 16).

It is possible to set 'background population probabilities' for individual polygenes and alleles. This is used in the calculation for any ancestor where the genotype is not stated.

1. Mating certificates are only available with the Cat and Dog versions of Breeders Assistant. 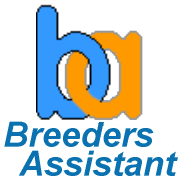