PedPro makes it easy to include images in pedigrees and other forms. You can use photos as background images (watermarks), have a dedicated photo box in the pedigree heading for the subject animal, use a photo as a logo, and you can include photos in the ancestors box.

Commonly used image formats are supported, including JPEG, PNG and TIFF. Whilst often used for images that are actual photographs, they can of course be images produced in other ways, such as clipart or line drawings. 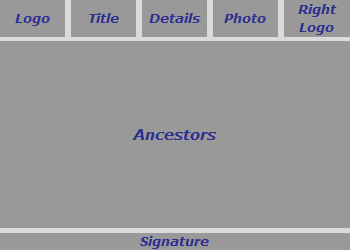 These are the boxes that can appear in the pedigree or trial mating header that are intended for photographs or other images. There are several such boxes, all of which are optional.

The Logo box, which on the left side of the header, is intended to hold an image that is your 'logo' - such as a graphic that promotes your kennel, cattery etc. It displays an image that does not vary as you move between forms. In a pedigree, the Photo box, which is to the right of the Title box, holds the photo of the subject animal. The photo displayed here is taken from the current record and so varies as you move between pedigrees.

Trial mating forms do not have a Photo box, but instead have separate Sire Photo and Dam Photo boxes that operate in the same way.

The Right Logo box, at the right hand side of the header, acts like an alternative 'logo' box. If you prefer your logo to appear on the right of the header, use this instead of the normal Logo box.

To choose the image that is displayed in any of these boxes, just click the box and use the Add Photo button to select a file.

By default, these boxes do not include any text, and have the photo positioning settings set so that the image will completely fill the available space. You can change this however.

Photos are normally stored in files such as JPEG files.

When you 'enter' a photo in PedPro, usually all you are doing is choosing the name of a file containing that photo. Then, whenever PedPro needs to show that photo, it loads the file. This means that you need to ensure that the file remains available whenever PedPro needs it. The information that PedPro saves (stores) for the photo is the filename.

In typical use this is what you would normally want, and it is what most other applications expect. It has the benefit that if the photo is updated, then the updated image will automatically show in PedPro next time it is run. But it has the disadvantage that if you copy your pedigree data file elsewhere, or move the photos on your computer (e.g. to a different hard drive or folder), then the 'link' between your PedPro data file and the photo file is broken. The photo no longer displays within PedPro until you update the filename.

By default, photo files are not embedded. To change this setting, select File|Settings and check/uncheck the Embed photos in data file option.

Note that changing this option only affects photos entered from that point on. E.g. if you turn this setting on, but have previously 'entered' photos in animal records (i.e., PedPro has 'stored' those photos as the external filenames), they will remain as externally linked. But all photos you add from this point will be embedded.

When you enter a photo by selecting a file, there are Brightness, Contrast and Gamma filters you can use to adjust the photo appearance. Brightness and contrast are self explanatory. Changing the Gamma is a way to adjust the relative proportions of bright and dark areas in the photo. 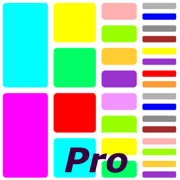