Breeders Assistant for Cats Pro Edition, our premier cat breeding software, can compute the colors that will arise from a mating, and include those on a mating certificate or trial mating pedigree? 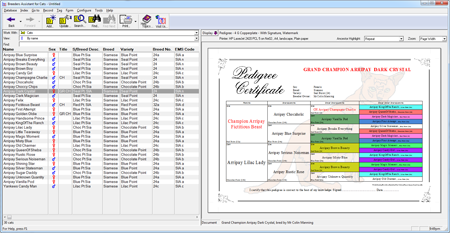 1. First you enter the sire's color genotype (in the Cat Details window, using the Genotype tab; this is available when you enable advanced cat records in the preference settings).

In this example we've entered bbl Dd. The bbl part means the cat has the chocolate (b) and fawn (bl) recessive alleles for the B locus. The Dd part means he is carrying the recessive gene for blue dilution (d). Which makes him Chocolate carrying blue and fawn.

2. Next you enter the dam's color genotype in the same way.

In this example we've set the dam to be Bbl Dd which means she is Seal point carrying blue and fawn.

3. We can now produce a mating certificate that includes the predicted colors for the mating between this sire and dam. This is only possible because Breeders Assistant for Cats Pro Edition understands the color genetics of most breeds of pedigree cat.

4. Cats are unusual when it comes to their coat color genetics because one of their color genes, the gene for red (O), is sex linked.

A red male has a single copy of the O gene. A tortie female is Oo whereas a self-pointed female is oo. All of which gives rise to a more complex outcome when the O gene comes into play.

Going back to our example, if we change the color genotype of the sire to have the O gene, ie. making him a Red point Siamese...

5. Then in the mating certificate the predicted offspring gets a lot more interesting because the color distribution for the male and female kittens will be different. This is only possible because Breeders Assistant for Cats Pro Edition understands all about the sex-linkage of the O gene. 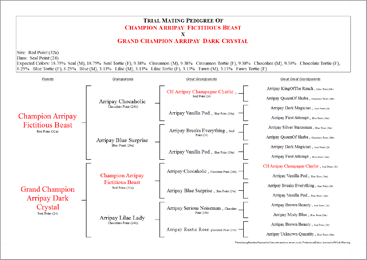 Helpfully you can also include color predictions in trial pedigrees as well as mating certificates (click to enlarge).

Coat color prediction is just one of many advanced features of Breeders Assistant for Cats Pro Edition, not found in any other pedigree breeding software we are aware of.

Understanding cat color genetics is one of the more fascinating aspects of cat breeding. Cat coat genetics can give rise to a wide variety of colors and coat patterns. Software such as Breeders Assistant for Cats can help by taking the legwork out of working out the color gene combinations for any given mating.

Color Genes of the Pedigree Cat

Much of what is given here assumes you are familiar with basic Mendelian genetics - i.e. you understand what is meant by the terms 'gene', 'allele', 'recessive', 'phenotype' etc.

For our purposes the genes we're interested in can be divided into the following groups:

Different terms are sometimes used for the same genetic colors, depending on breed and sometimes country too. This can really confuse matters. E.g. a cat that is genetically 'black' (B- D- o/oo aa) is also known as:
- Brown in Burmese
- Seal in Siamese
- etc.

In this article we are going to stick to the 'genetic' color descriptions.

This is quite a complex topic but its understanding is fundamental to understanding the basic color genetics of the cat. Many of the other genes are simple recessives that have easy-to-understand effects.

Melanin is the substance or pigment that gives a cat's hair its color. There are two distinct types of melanin in the cat - as in many mammals - eumelanin and phaeomelanin. Eumelanin is, in the absence of other modifying genes (see below), black or dark brown. Phaeomelanin is, in its unmodified form, a yellowish color though cat breeders generally call it red.

A protein called the Agouti protein has a major effect on the 'injection' of melanin into the growing hair. This is widespread in many mammals, though not in humans. The Agouti protein causes a banding effect on the hair: it causes a fairly sudden change from the production of eumelanin (black/brown pigment) to phaeomelanin (red/yellow pigment). The result is the ticked, agouti appearance as typified by the wild rabbit. The term 'Agouti' actually refers to a South American rodent that exemplifies this type of hair.

In the domestic cat, however, there are three separate factors that between them conspire to generate the 'primary' colors and patterns:

There is a mutant form of the Agouti protein, resulting from a recessive gene (symbol a). When a cat is homozygous for a (i.e., aa), the Agouti protein in the melanocytes is replaced by a 'faulty' form that has a much lesser (though not zero) inhibitory effect on eumelanin. This results in hairs that contain eumelanin throughout, giving rise to solid ('self') colors.

Tabby patterns (mackerel, blotched, spotted) are controlled by genes that cause the amount of agouti protein (or 'faulty' agouti protein, if the cat is aa) in different areas of the cat's coat to be greatly reduced. It has the effect of preventing the normal shift from eumelanin to phaeomelanin. Thus in a tabby cat the hairs in the black parts where the tabby pattern shows through are eumelanin throughout, whereas in the other areas the typical agouti ticking is seen.

Its worth noting that the effect of the tabby patterning genes on the hairs is similar, but not identical, to the non-agouti gene. This can be seen in the self colored cat that still shows tabby patterns or barring.

The various tabby genes are covered in more detail below.

This is a gene with symbol O and is probably the most interesting gene affecting cat color/pattern from a genetic point of view.

Its effect is to replace all the eumelanin in the growing hairs with phaeomelanin. I.e, the hairs exhibit red-based rather than black-based colors.

What makes it more interesting though is that:

Red with Tabby: phaeomelanin pigment is affected by both forms of the agouti protein to more or less the same extent. The important point is that it is affected. And for this reason, tabby patterns do show up in the phaeomelanin-based coat of the red cat, because the these patterns are a result of reduced levels of the agouti/non-agouti protein. The tabby markings show as a richer form of the red-based color, because the phaeomelanin has been inhibited to a lesser degree.

Tortoiseshell: a patchwork effect where some parts of the coat have eumelanin and the others phaeomelanin. The eumelanistic parts are affected by all the normal modifying genes that are active on eumelanin: B, D, Dm and in the presence of normal Agouti (A-) will display tabby markings prominently. The phaeomelanistic parts are affected by D and Dm in the usual way and tabby markings can continue through from the eumelanistic parts, this time showing as a richer red. The 'richness' of red coloration is also affected by what are known as 'rufous polygenes' (see below).

With this topic under our belt we can now move on the describing the genes one by one.

These are the genes that affect the pigment colors (as opposed to pigment distribution or pattern - either within the hairs or over the body).

The most important genes that affect pattern are the various tabby genes. Many breeders have, understandably, associated tabby with the Agouti (A) gene because of the effect of the non-agouti recessive self form (aa), however the tabby patterns themselves are not controlled by the A gene; what the A gene controls is the degree to which the tabby patterns will be visible (either highly, especially in an eumelanistic coat, or hardly if at all).

So far in this article we have only considered genes that affect coat color and pattern. There are of course many, many others. Often these genes will always be the same 'state' for a given breed and are characteristic of that breed. We list some of the more well established ones here.

Most of these genes are either genes that affect hair length or wavyness ('Rex'), or they are genes that are, in reality, congenital deformities but which are nevertheless recognised as breeds in their own right, particularly in the US.

A Comparison With Dogs

It is perhaps interesting to compare cat color/pattern genetics with dog color genetics. For there are many similarities, and yet also some interesting differences.

The most striking difference is the gene that enables phaeomelanin (red/yellow). In dogs - and many other mammals for that matter - there is a gene called the extension gene, symbol E. The term 'extension' refers to the degree of extension of eumelanin across the coat. In the non-extended recessive form, the coat is entirely phaeomelanin based, sometimes called recessive red or recessive yellow by dog breeders. In the domestic cat however we have the sex-linked red gene (O).

The chocolate gene (B) is present in dogs, and has exactly the same effect, though the lighter phase bl allele does not seem to occur.

The blue dilution gene (D) also occurs, and works in the exact same way. Unlike cats however the recessive blue form (dd) is completely missing in many breeds, as is the dilute modifier gene Dm.

Piebaldism (white spotting) - the S gene - is also present in dogs, where as with cats aspects of the operation of this gene are not understood. It likewise is associated with deafness in dogs just as it is in cats.

One area of controversy in dogs is the inheritance of black. There seems to be two types: dominant black and recessive black. There is general agreement about the recessive form, in that it is at the bottom of the Agouti series (aa) and in that it is quite consistent with black-based solid colored cats. It is generally also agreed that there is a dominant form of black in many breeds of dog, and traditionally this has been put at the head of the Agouti series (As). However, this flies in the face of the behaviour of the Agouti series in almost all other mammals, none of which has a dominant phaeomelanin suppressor like As at the top of the series. Newer research indicates that 'dominant black' in dogs does not belong in the Agouti series at all but is a separate dominant gene (symbol K); the K series is also postulated as controlling brindle, with the brindle allele being intermediate between dominant black (K) and 'normal' (k). Robinson 4th Edn. mentions that it was thought at one time that there might be a dominant form of black in cats: "Tjebbes in 1924 published a report on crosses between Siamese and a tabby and indicated that the Siamese transmitted an epistatic gene that obscured the tabby pattern". However, there was no further breeding data to substantiate the claim, and perhaps even if correct the gene doesn't appear to be present in the present day pedigreed cat gene pool. It is perhaps interesting to speculate whether this may in fact be the same as the K series of current thinking in dogs.