The 'mean kinship' of an individual with respect to a group is the mean of its kinship coefficient with every other member of the group, including itself.

Its a measure of the relatedness of an individual to the rest of the group.

How To Calculate Mean Kinship

Computing mean kinships for a group of individuals requires the construction of a relationship matrix ('A') for the individuals concerned and their ancestors (to a chosen depth or ancestry, or all available ancestry). Then, for each member of the group for which the report is compiled, the kinships between that member and every other member of the group (including itself) can be summed and averaged.

It is relatively easy to run out of memory when the report many individuals and their ancestors. E.g. if there are 100,000 individuals and ancestors that would require a matrix with 10,000,000,000 i.e. 10 billion entries. This is beyond the realistic memory capacity of most desktop computers. For this reason it is necessary to restrict the report where possible, by reducing the number of individuals for which the report is compiled and/or reducing the depth of ancestry included in the analysis.

This can also be expressed as a value called 'Gene Diversity' (GD), which is defined as 1 minus the mean of the mean kinships. Which means the higher the GD, the better.

The Extended of Breeders Assistant can rank prospective matings in order to minimize the mean kinship in the resultant offspring. Video 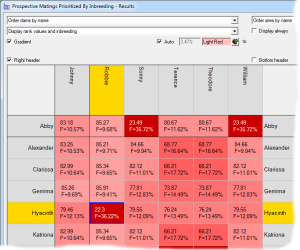 Breeders Assistant can also be used to rank prospective matings according to the resulting inbreeding. I.e. it can take a group of breeding males and females and compute the inbreeding that would result from thousands of potential matings, listing the results in increasing order of offspring inbreeding. Video

The Extended Edition of Breeders Assistant provides a 'gene diversity metrics' report which computes mean kinship for a group of breeding sires and dams, along with other values such as inbreeding coefficients and pedigree completeness indexes. This is one of a number of advanced population genetics tools.

For a video demonstration see this video

The sires and dams are typically specified using a selective index (view) into the full set of records in your database. Additional filter conditions can also be set e.g. to only include animals less than a given age, or meet other customized conditions.

To access this select Population Analysis from the Tools menu, then choose Gene Diversity Metrics.

A demonstration of this feature can also be found in the 'Mate Selection, Kinship And Population Analysis' tutorial included with the product.

The columns displayed by default include:

E.g. the 5th row in the 2nd column shows the inbreeding that would result from mating 'Robbie' against 'Hyacinth'. In this case the inbreeding of the resultant offspring would be 36.22% and the rank value would be 22.3.

The rank values are assigned by first working out the range of inbreeding that would result from all the matings, then scaling them from 0 to 100, where 0 represents the worst outcome (i.e. highest F) and 100 the best.