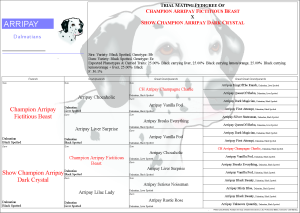 Understanding dog coat color genetics can be one of the more challenging aspects of breeding dogs. Canine coat genetics gives rise to a wide variety of patterns and colors. Software such as the dog version of Breeders Assistant can help by taking the legwork out of working out the color gene combinations for a given mating.

This article assumes you understand Mendelian genetics - i.e. you know what is meant by the terms 'gene', 'allele', 'phenotype' etc.

The genes of interest can be broadly classified as either:

Different terms are sometimes used for the same genetic colors, depending on breed and sometimes country too. This can really confuse matters. E.g. a dog that is genetically 'recessive red' (ee) is known as yellow in some breeds. This article will try to stick to the 'genetic' color descriptions.

This is quite a complex topic but its understanding is fundamental to understanding the basic color genetics of the dog. Many of the other genes are simple recessives that have easy-to-understand effects.

Melanin is the substance or pigment that gives a dog's hair its color.

There are two distinct types of melanin in the dog - as in many mammals - eumelanin and phaeomelanin. Eumelanin is, in the absence of other modifying genes (see below), black or dark brown. Phaeomelanin is, in its unmodified form, a yellowish color.

A protein called the Agouti protein has a major effect on the 'injection' of melanin into the growing hair. This is widespread in many mammals, though not in humans. The Agouti protein causes a banding effect on the hair: it causes a fairly sudden change from the production of eumelanin (black/brown pigment) to phaeomelanin (red/yellow pigment). The result is the agouti appearance as typified by the wild rabbit. The term 'Agouti' actually refers to a South American rodent that exemplifies this type of hair.

NOTE: It is worth mentioning at this point that there remain areas of considerable doubt about the exact genes/alleles that affect certain aspects of coat color in dogs. The main ones surround the proposed 'dominant black' (As) at the top of the Agouti series, and in the E series there are questionmarks over Em (black mask) and Ebr (brindle).

In the past it was thought that with the A and E series, you had:

But newer research indicates that 'dominant black' As may not belong in the Agouti series at all - and this would be consistent with other mammals that also share the Agouti series, none of which has a dominant phaeomelanin suppressor like As at the top of the series. Research also indicates that brindle (Ebr in the older system) and 'dominant black' form a separate series of at least 3 alleles, which can be called the K series (for blacK); this includes both dominant black and brindle.

It appears that the three loci E, K and A act together as follows:

A Comparison With Cats

It is perhaps interesting to compare dog color/pattern genetics with cat color genetics. For there are many similarities, and yet also some interesting differences.

The most striking difference is that cats do not have the Extension (E) gene. But they do have a fascinating alternative - the so-called Red gene (O). The effect of the O allele is to cause eumelanin to be replaced with phaeomelanin. But what makes O particularly interesting is that it is sex-linked. Males can be O or o, but females can be OO, Oo or oo. And the heterozygote, Oo is also a fascinating case because it is this that causes the Tortoiseshell pattern - where the cat's coat is made up of a patchwork of eumelanistic areas (black based) and phaeomelanistic areas (red based).

Cats also do not seem to have a dominant form of black, nor do they exhibit brindling.

Cats do have the Agouti series - though there is thought to be just 2 alleles present which correspond roughly to Ay and a in the dog.

Eumelanistic colors are affected by blue dilution (D gene) and chocolate (B) just as they are in the dog, but with some additions. The B gene in the cat has a third, more recessive allele, symbol bl, which gives rises to a lighter phase of chocolate (called cinnamon). Secondly, there is a dominant modifier to the blue dilution gene that causes a brownish tinge to cats that are homozygous for blue dilution (dd). Blue dilution has the same effect on phaeomelanin in cats as it does in dogs.

Piebaldism (white spotting) - the S gene - is also present in cats, and as with dogs aspects of the operation of this gene are not understood. It likewise is associated with deafness in cats just as it is in dogs. Cat breeders generally consider there to be 2 alleles (S and s) in the series, with S being incompletely dominant over s.

Merle (M), Graying (G), Ticking (T) and Super-Extension (Se) are not recorded as existing in the cat.

The Professional and Extended Editions of Breeders Assistant, can compute the colors that will arise from a mating, and include those on a mating certificate or trial mating pedigree, for many dog breeds.

Prior to using the color genetics prediction tools you need to select a gene configuration.

To do this, select Mendelian Genetics from the Configure menu, then choose a configuration.

This example uses a configuration for Dalmatians.

First you enter the sire's color genotype (in the Dog Details window, using the Genotype tab; to make sure this tab is visible you need to enable the Advanced cat records in the User Interface tab of the Configure|Preferences window.

In this example Bb Dd has been entered. The Bb part means the dog carries liver (chocolate) (b) for the B gene. The Dd part means he is carrying the recessive gene for blue dilution (d). Which makes him Black Spotted carrying blue and liver.

Next you enter the dam's color genotype in the same way.

In this example the dam has been set to Bb dd which means she is Faded Lemon Spotted carrying liver. 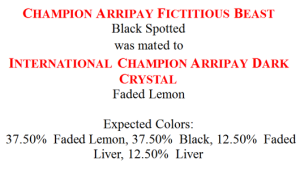 In this example a color prediction has been generated as part of a mating certificate that includes the expected colors for the mating between this sire and dam.

Breeders Assistant also understands about the carried colors, and you can also have these included in a prediction of prospective offspring. 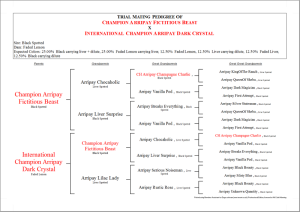 Helpfully you can also include color predictions in trial pedigrees as well as mating certificates.

This is a trial pedigree produced using the Professional Edition of Breeders Assistant for Dogs that includes coat color predictions for the expected puppies between two black spotted Dalmatian parents.

This was generated with a gene configuration for Dalmatians configured.

This shows a color genotype entered into the Dog Details window of Breeders Assistant for Dogs.

The Professional Edition can interpret and use genotypes for many pedigree dog breeds using its internal knowledge of dog color genetics. This screenshot was taken using a gene configuration for Dalmatians.

In this example the genotype entered is Bb Dd. The Bb part means the dog carries liver (chocolate) (b) for the B gene. The Dd part means it is carrying the recessive gene for blue dilution (d). Which means this is a Black Spotted carrying blue and liver.

This shows a color genotype entered into the Dog Details window of Breeders Assistant for Dogs.

The Professional Edition can interpret and use genotypes for many pedigree dog breeds using its internal knowledge of dog color genetics. This screenshot was taken using a gene configuration for Dalmatians.

In this example the genotype entered is Bb dd. The Bb part means the dog carries liver (chocolate) (b) for the B gene. The dd part means it has two copies of the recessive gene for blue dilution (d). Which means this is a Faded Lemon Spotted carrying liver.

The Professional Edition can interpret and use genotypes for many pedigree dog breeds using its internal knowledge of dog color genetics.

Such a mating will (theoretically) produce a range of colors in the puppies, the most likely colors being Black and Faded Lemon. In this example the prediction does not mention the colors that will be carried by the pups, but that is possible too.

This shows a prediction of expected and carried coat colors resulting from mating two Dalmatian dogs with different color genotypes, generated by Breeders Assistant for Dogs.

The Professional Edition can interpret and use genotypes for many pedigree dog breeds using its internal knowledge of dog color genetics.

Such a mating will (theoretically) produce a range of expressed and carried colors in the puppies. E.g. 37.5% of the pups will theoretically be black, but within that 37.5% some will carry liver & blue dilution (25%), whereas others will only carry blue dilution (12.5%).

This is a bracketed trial pedigree produced using the Professional Edition of Breeders Assistant for Dogs that includes coat color predictions for the expected puppies.

This was generated with a gene configuration for Dalmatians configured.

In this example a variety of colors can be expected in the offspring because the sire is black spotted and the dam faded lemon spotted.